What Can We Help You Find?

Arrow:  Made of  wood, aluminum or carbon. It's a fin-stabilized projectile that is launched via a bow, and usually consists of a long straight stiff shaft with stabilizers called fletchings, as well as a weighty (and usually sharp and pointed) arrowhead attached to the front end, and a slot at the rear end called the nock for engaging the bowstring.

Broadhead: A large cutting point assembly, attached to an arrow shaft for hunting.

Draw Weight: The number of pounds of force required to draw a bow to its draw length.

Draw Length: At full draw the distance in inches from nock point on bow string to deepest grip spot (pivot-point) plus 1 3/4″. With another words - the total length of the string when at full draw.

Limbs: The upper and lower arms of a bow. They got compressed when the bow is drawn back.

Nock: The notch at the rear end of an arrow; also the notches at the ends of the bow limbs to which the bowstring is attached, or looped over

Quiver: A container for holding arrows, bolts, or darts. It can be carried on an archer's body, the bow, or the ground, depending on the type of shooting and the archer's personal preference.

Release: A mechanical device with a trigger that you attach the  bow string. Used to help  you draw the bow.

Rest: A shoulder of horn or metal used on some bows to support the arrow.

Sight: A bow accessory that contains pins that can be adjusted. Used for aiming at the target.

String Loop: An addition to the bowstring for attaching your release to. Used to prolong the       life of your bowstring.

Compound – A bow that has cams and/or wheels that the string uses instead of just attaching to the bow limbs. A compound bow is a new type of bow and one of the more popular types and can have added advantages such as let-off, increased speed, smoother draw cycles and the availability of adding more accessories.

CrossBow – This is gun type of a regular bow.  The crossbow features a stock and trigger just like a gun, but instead of a barrel has a shelf where the arrow sits on top of and is propelled by the bow string.  This is another very popular option and also comes with the ability to add accessories.

Traditional Bow – This is the original type bow so to speak.  It is basically just a piece of wood or other type of material with notches cut into the tip of the limps where the string attaches to.  There is no let-off and does not allow for the addition of accessories.  This type of bow is slowly gaining in popularity as it is more of a challenge to shoot and master.

Recurve Bow – A recurve bow is essentially the same concept as the traditional type bow, however the limbs are curved back a bit. 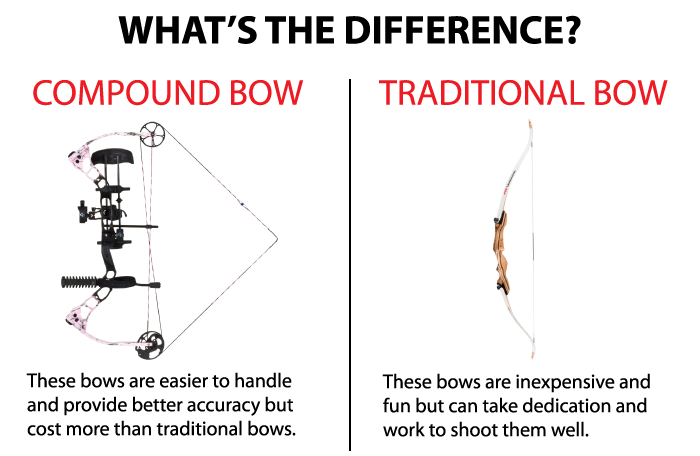 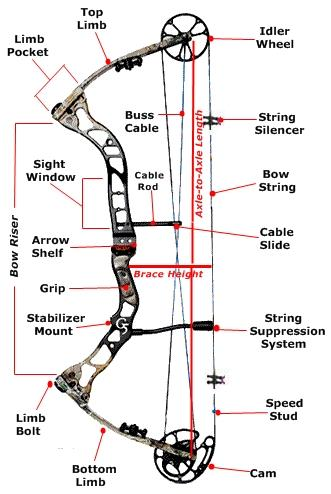 © Archery Without Borders. All Rights Reserved. Designed by KREATIVE

Our website uses cookies to make your browsing experience better. By using our site you agree to our use of cookies. Learn More I Agree
× What Are Cookies As is common practice with almost all professional websites this site uses cookies, which are tiny files that are downloaded to your computer, to improve your experience. This page describes what information they gather, how we use it and why we sometimes need to store these cookies. We will also share how you can prevent these cookies from being stored however this may downgrade or 'break' certain elements of the sites functionality. For more general information on cookies see the Wikipedia article on HTTP Cookies. How We Use Cookies We use cookies for a variety of reasons detailed below. Unfortunately in most cases there are no industry standard options for disabling cookies without completely disabling the functionality and features they add to this site. It is recommended that you leave on all cookies if you are not sure whether you need them or not in case they are used to provide a service that you use. Disabling Cookies You can prevent the setting of cookies by adjusting the settings on your browser (see your browser Help for how to do this). Be aware that disabling cookies will affect the functionality of this and many other websites that you visit. Disabling cookies will usually result in also disabling certain functionality and features of the this site. Therefore it is recommended that you do not disable cookies. The Cookies We Set
Account related cookies If you create an account with us then we will use cookies for the management of the signup process and general administration. These cookies will usually be deleted when you log out however in some cases they may remain afterwards to remember your site preferences when logged out. Login related cookies We use cookies when you are logged in so that we can remember this fact. This prevents you from having to log in every single time you visit a new page. These cookies are typically removed or cleared when you log out to ensure that you can only access restricted features and areas when logged in. Form related cookies When you submit data to through a form such as those found on contact pages or comment forms cookies may be set to remember your user details for future correspondence. Site preference cookies In order to provide you with a great experience on this site we provide the functionality to set your preferences for how this site runs when you use it. In order to remember your preferences we need to set cookies so that this information can be called whenever you interact with a page is affected by your preferences.
Third Party Cookies In some special cases we also use cookies provided by trusted third parties. The following section details which third party cookies you might encounter through this site.
This site uses Google Analytics which is one of the most widespread and trusted analytics solution on the web for helping us to understand how you use the site and ways that we can improve your experience. These cookies may track things such as how long you spend on the site and the pages that you visit so we can continue to produce engaging content. For more information on Google Analytics cookies, see the official Google Analytics page. We also use social media buttons and/or plugins on this site that allow you to connect with social network in various ways. For these to work, the social networks may set cookies through our site which may be used to enhance your profile on their site, or contribute to other purposes outlined in their respective privacy policies.